Reviewing a utility patent application can seem like an impossibly daunting task for applicants who don’t consider themselves experts.  It’s how I feel when my accountant asks me to review my tax return. It looks alright to me, I guess.

How do you know what to look for?

Inventors may feel tempted to approve a draft application because it’s difficult to read and the patent professionals supposedly know what they’re doing. I think inventors would help themselves immensely by focusing on two key sections and understanding their respective purposes:

2) Detailed Description (of the Preferred Embodiments) and Figures, sometimes collectively referred to as the specification.

Here’s an example of a claim set to help illustrate the hierarchy and claim scope: 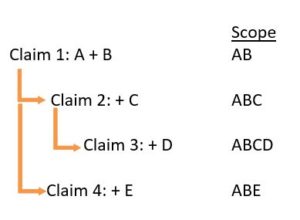 Independent Claim 1 recites only two elements: A and B. Therefore, the scope of Claim 1 is AB, meaning that this claim would be infringed by a product simply having those two elements. Claim 2 depends on Claim 1 and further adds element C, thereby narrowing the scope of Claim 2 to ABC. A product that includes features A and B, but not C, would infringe Claim 1, but not Claim 2. You can structure dependent claims to depend upon prior dependent claims, such as Claim 3 depending upon Claim 2 in the above example.  The scope of Claim 3 would include all prior claims linked in the chain, i.e., ABCD in this example.  Dependent Claim 4 is similar to Claim 2 in that it depends directly upon Claim 1, thereby making the scope ABE.

You can start a whole new claim set with a new independent claim differing in scope, e.g., DEF.

What typically occurs in the patent application process is that the examiner finds relevant prior art to reject several, if not all, of the original claims.  The applicant can then amend the claim scope by amending the existing claims or adding new claims.  After reviewing the Office Action claim rejections and the cited prior art references, you and your patent attorney may realize that your invention is distinguishable from the prior art because of a new feature (e.g., F).  So, you now wish to amend independent Claim 1 by adding F.

However, you cannot claim anything that was not disclosed in your specification.  That brings us to the second critical section of the application, i.e., the specification which comprises the detailed description and drawings.

The written detailed description and illustrated figures should show all the gory details of your invention, especially those features you consider unique. That way, if you ever need to claim a specific feature, the specification has it covered.

In reviewing the specification, you might feel tempted to omit or delete specific details because you don’t want to limit your patent.  The concern is understandable, but misplaced because the section that will limit your invention is not the specification. It’s the claims. Think of the specification as a toolbox containing all the parts that you may eventually use to build an allowable claim. Since you cannot foretell what prior art will be found or how the examiner will apply the prior art, you want your specification to provide sufficient ammunition for your claims. That is why you will often find a dichotomy between the broadly worded claims and the highly detailed specification.

Startup Patent Attorney | IP Lead Partner at Innovation Capital Law Group
If you are a startup or small business, we want to help. Our mission is to equip entrepreneurs with solid IP rights that facilitate funding, growth and sales. Let's get to work! Direct: 949.223.9623 | Email: vlin@icaplaw.com

How to Register a Trademark